Jennifer Lawrence stars in the smash hit action thriller based on Suzanne Collins’ bestselling novel. 16-year-old Katniss Everdeen volunteers in her younger sister’s place to enter the arena of the Hunger Games, a state-sponsored battle to the death. Forced to rely upon her sharp instincts as well as the mentorship of former victor Haymitch Abernathy, she’s pitted against highly-trained Tributes who have prepared for these games their entire lives. If she’s ever to return home to District 12, Katniss must make impossible choices in the arena that weigh survival against humanity and life against love.

THE HUNGER GAMES is directed by Gary Ross, with a screenplay by Gary Ross and Suzanne Collins and Billy Ray, and produced by Nina Jacobson’s Color Force in tandem with producer Jon Kilik. Suzanne Collins’ best-selling novel, the first in a trilogy published by Scholastic that has over 16 million copies in print in the United States alone, has developed a massive global following. It has spent more than 160 consecutive weeks/more than three consecutive years to date on The New York Times bestseller list since its publication in September 2008, and has also appeared consistently on USA Today and Publishers Weekly bestseller lists.

Blu-ray Special Features:
The World is Watching: Making of The Hunger Games
Game Maker: Suzanne Collins and The Hunger Games Phenomenon
Letters from the Rose Garden
Controlling the Games
A Conversation with Gary Ross and Elvis Mitchell and More

To celebrate the home entertainment release of ‘The Hunger Games’ we’re giving away an autographed poster! One grand prize winner will receive ‘The Hunger Games’ on Blu-ray and a theatrical poster signed by director Gary Ross, Elizabeth Banks, Josh Hutcherson, Liam Hemsworth, Woody Harrelson and Lenny Kravitz. Four runner-up winners will each receive a Blu-ray copy of ‘The Hunger Games.’ Here’s how to enter:

How to Enter Contest:
Step 1: Follow @yahoomovies on Twitter
Step 2: Tweet this message:
May the odds be ever in your favor. I want to win a signed #TheHungerGames poster and Blu-ray from @yahoomovies http://yhoo.it/thg-blu
Note: One entry per person/email address/Twitter handle.
Step 3: The giveaway ends 11:59 p.m. PT on August 20th, 2012. Winners will be announced on Twitter and will receive a Direct Message with further information. Keep in mind, this giveaway is open to U.S. residents only. If you have any other questions, check out the official rules or feel free to tweet us.

If you don’t win the Hunger Games Blu-Ray prize pack don’t worry. We still have a way you can save 50% off the Blu-Ray and get he digital download instantly free from Amazon. Click the banner below for details and to place your order. 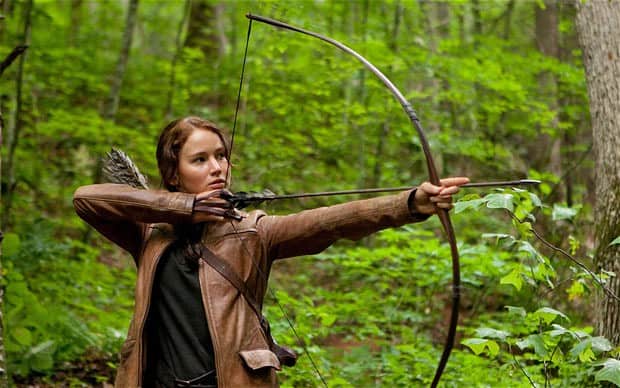