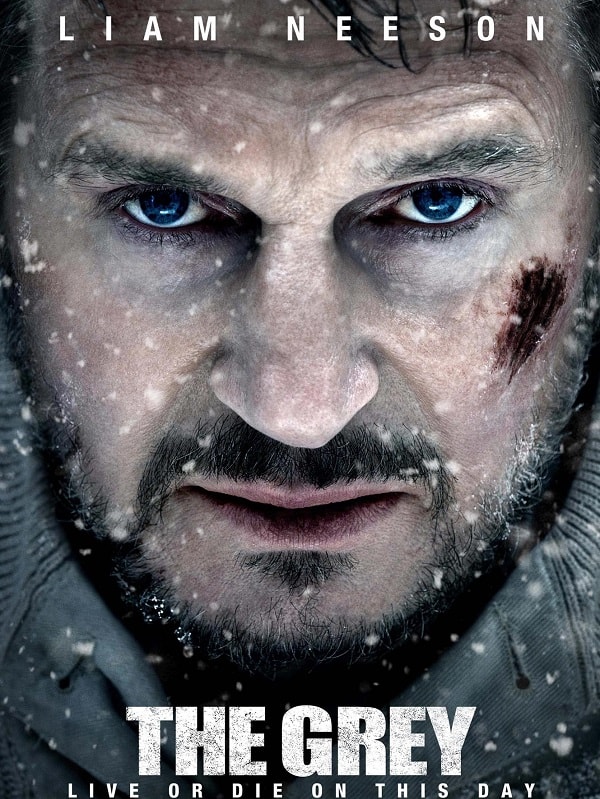 Director Joe Carnahan teams up with Liam Neeson to create a fast-paced, suspenseful film with, of all things,….wolves. Carnahan, director of past hits like Narc (2002), Smokin’ Aces (2006) and his most recent A-Team (2010) adaptation, knows how to pump testosterone and action into almost every scene. His use of wind and weather as an added element to the wolves brings a realism to the situation at hand for Ottway (Neeson) and his surviving group of men. In fact, the conditions shown on-screen are not CGI, but actual weather in British Columbia, Canada where shooting took place for the film. This is a familiar and comfortable territory for Neeson, having starred in his acclaimed role in Taken. The haunting flashback images of his wife may have appealed to Neeson himself, given the tragic incident with his own wife in real life, Natasha Richardson (she died unexpectedly in 2009 after a skiing injury/accident).

What works for The Grey is the horror and suspense elements throughout. Carnahan, whom also wrote the screenplay, gives each character their own identity and uniqueness. Neeson is the ‘leader of the pack’, a tough-as-nails hard ass who is a survivalist and pushes the oil men forward. This added emphasis on character development puts the film on an above-average plane. The wolves themselves are larger than life, smart and aren’t too keen on playing nice. The scene where Ottway and the group stumble into five pair of eyes staring back at them in the darkness is spooky and brilliant.

However, the film isn’t without it’s detractors. A majority of the script has excessive cursing, whether it’s in a dangerous or joyous situation. The typical Hollywood formula of killing off characters one at a time is present, but at least exist some interesting sound and editing effects done to balance the somewhat predictable plotline out. Finally, there is some grotesque violence on display here. Bodies pile up and are discovered after the flight crash, wolves tearing apart men swiftly…without regard for viewers’ watching, and accidents galore. These are not deal breakers by any means…The Grey is a harrowing experience. The scenes where Ottway goes through the men’s wallets, looking at photos, brings calming emotion to an otherwise bleak tale.

The biggest thing the film does is plug viewers into that very situation, and asks them: would you have what it takes to survive? (Author’s note: Honestly, I don’t know if I would.) As Ottway’s wife always reminds you, “don’t be afraid.”

Located in Minnesota, Ryan Kummer is a college student enrolled at Normandale Community College, studying for an Associate Arts with Emphasis in Mass Communication. He plans to transfer by next year to acquire his B.A. in Mass Communication from Metropolitan State University. In his spare time, he enjoys watching movies, playing video games, and keeping up on current events. He had a poem submitted in a nationally published book in sixth grade, wrote for his high school newspaper, and currently writes film analysis on HubPages.com