Well Hollywood continues to release movies in 3D that were never intended to be in 3D. They have no new fresh ideas and wonder why viewers continue to stay home for there cinema. If there was a movie that would be fun to see on the Big Screen it’s Monsters Inc. But save your money 3D is not worth it.
MOVIE INFO
After exploring the worlds of toys and bugs in the two Toy Story films and A Bug’s Life, the award-winning computer animation company Pixar delves into the realm of monsters with its fourth feature. Hulking, blue-furred behemoth James P. “Sully” Sullivan (John Goodman) and his one-eyed assistant Mike Wazowski (Billy Crystal) are employed by Monsters, Inc., a scream processing factory. It seems that the denizens of their realm thrive on the screams of kids spooked by monsters lurking under their beds and in their closets. It’s the job of Sully, Mike, and their co-workers, including sarcastic Randall Boggs (Steve Buscemi), crab-like CEO Henry J. Waternoose (James Coburn), and lovely snake-headed receptionist Celia (Jennifer Tilly) to keep the frights flowing. When Sully and Mike are followed back into the monster world by a very unafraid little human girl named Boo (Mary Gibbs), they are exiled to her universe, where they discover that such a modern-day mythological specimen as the Abominable Snowman is a fellow refugee. 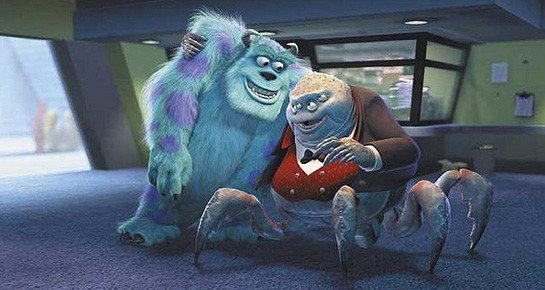