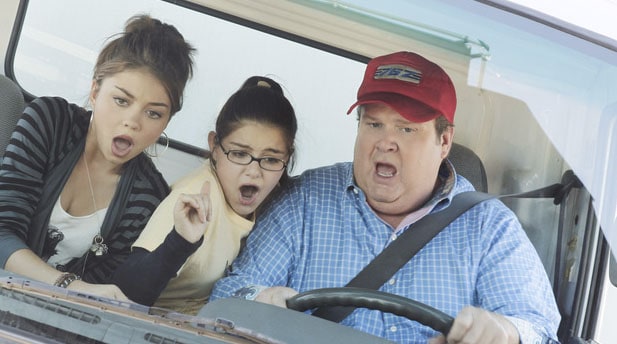 About the show:
After 11 Emmys and countless belly laughs, it’s obvious we’re not the only ones who fell in love with this hilarious Modern Family.

First, let’s meet the Dunphys. Phil is the enthusiastic, “tries too hard” husband/dad who loves his slightly-uptight (but in a good way) wife, Claire, and their three way different kids. Haley is the independent, eye-rolling teen. Middle sister Alex is wise beyond her years and little brother Luke, well, isn’t.

Claire’s no-nonsense dad, Jay Pritchett, married a much younger Colombian beauty named Gloria Delgado. Her passion for life has rubbed off on her young son Manny, who marches to the beat of his own drum, usually in a burgundy dinner jacket.

Jay’s lawyer son, Mitchell, embraced a major life change when he and his free-spirit partner, Cameron, adopted their super-cute Vietnamese baby, Lily. They’re learning all the parenting ropes as they go. Fortunately, they have the loving support of their extended, eclectic, ever-funny family.

As we already mentioned, Modern Family won 11 Emmy Awards, including Outstanding Comedy Series two years in a row. We’re sure the accolades, not to mention the big laughs, will keep rolling in throughout Season 3.