Megan Fox strips down to her bra and underwear in the This Is 40 Trailer!

When is it not nice to see Megan Fox in her bra and underwear? But wait, watch the trailer this movie actually looks pretty funny and should be a great escape to avoid the family at the holidays.
In the scene — in the below trailer at 1:55-in — a mystified Debbie asks Desi (referring to her breasts), “Are those real?” Desi replies, “Yeah. I’m just young.” Then Debbie appears to go in for a feel — you know, to verify Desi’s claim, like any other self-hating middle-aged mom would do. 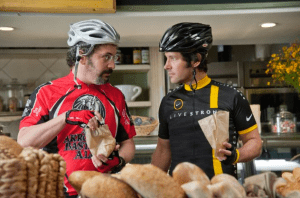 The film, which is being described as the kinda sorta follow up sequel to Knocked Up, features Paul Rudd and Leslie Mann back in action, a few years into the future.
They reprise their roles as married couple Pete and Debbie who love each other, but go through ups and downs as they grow older.
The film also features Leslie Mann’s real life kids again, Maude and Iris, but of course, they’re a little older now as well.
Other celebs you’ll see in the flick include Melissa McCarthy, Jason Segel, John Lithgow, Albert Brooks, and oh yeah—Megan Fox in her bra and underwear. Take a look.
This is 40 will swing into theatres on December 21, just in time for the holidays.

I have to know though, do you think this new Judd Apatow flick will be as good as Knocked Up was?
Let me know what you’re thinking below, and of course, hit the subscribe button so you can keep up with all the best in movies, and of course, entertainment news.
Also, make sure you give this video a thumbs up because I think Megan Fox would want you to!
Hosted, Written, and Produced By: Deidre Behar