FIRST TIME ON BLU-RAY
Director Steven Spielberg’s terrifying landmark classic arrives on Blu-ray for the first time ever, in honor of Universal’s 100th anniversary celebration. When a giant great white shark arrives on the shores of a New England beach resort town and wreaks havoc with bloody attacks, a part-time sheriff must team up with a marine biologist and an old seafarer to hunt the monster down. With digitally remastered and fully restored picture and sound, and over four hours of bonus content, this iconic summer thriller is set to scare an entire new generation from going back in the water.

Watch an exclusive behind-the-scenes bonus feature clip from ‘Jaws,’ available for the first time on Blu-ray below: 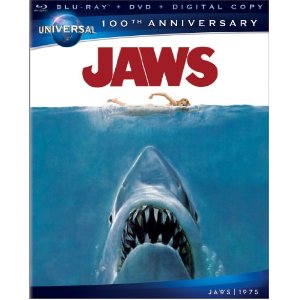 Blu-ray Special Features:
The Shark is Still Working: The Impact & Legacy of Jaws
Jaws: The Restoration
The Making of Jaws
From the Set
Deleted Scenes & Outtakes and More

To celebrate the Blu-ray release of ‘Jaws,’ we’re doing a giveaway! Five grand prize winners will receive a ‘Jaws’ Blu-ray Prize Pack consisting of a ‘Jaws’ Blu-ray Combo Pack and a ‘Jaws’ keychain can opener. Here’s how to enter:

Step 1: Follow @yahoomovies on Twitter
Step 2: Tweet this message:
We’re going to need a bigger boat. I want to win a ‘Jaws’ Blu-ray Prize Pack from @yahoomovies http://yhoo.it/jaws-blu #YahooDVD
Note: One entry per person/email address/Twitter handle.
Step 3: The giveaway ends 11:59 p.m. PT on August 20th, 2012. Winners will be announced on Twitter and will receive a Direct Message with further information. Keep in mind, this giveaway is open to U.S. residents only. If you have any other questions, check out the official rules or feel free to tweet us.