Exclusive 2013 Movie Schedule what movies are worth seeing in 2013 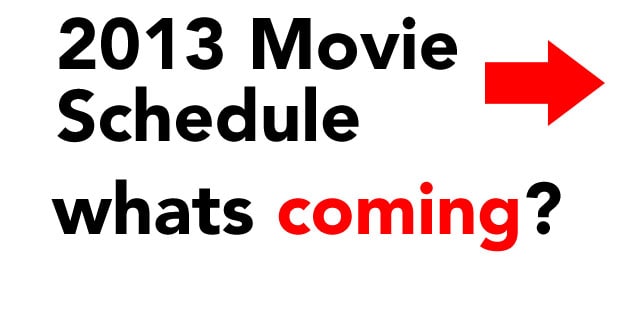 If the past few movie trailers have taught us anything, it’s that the new movie releases in 2013 will have us on the edge of our seats. It’s going to be a big year with such highly anticipated titles like ‘Iron Man 3,’ ‘World War Z,’ ‘Gangster Squad,’ ‘Carrie,’ ‘Evil Dead,’ ‘Star Trek Into Darkness‘ and ‘The Great Gatsby‘ all making their theatrical debuts.

Just so that you may sleep easier at night, we’ve compiled a list of release dates for some of the biggest movies of 2013. Go ahead, plan accordingly!
January 2013 Movies
January 4 (Friday)
Texas Chainsaw 3D (in 3D)
The Impossible (Expands Wide)

Want the full list check out Firstshowing.net they have a super list of all the movies coming out in 2013 they even update this list as needed when movies change dates or info becomes available about the films of 2013. Make sure you check out there Google Calendar of all the movies where you can view info about each movie by date.